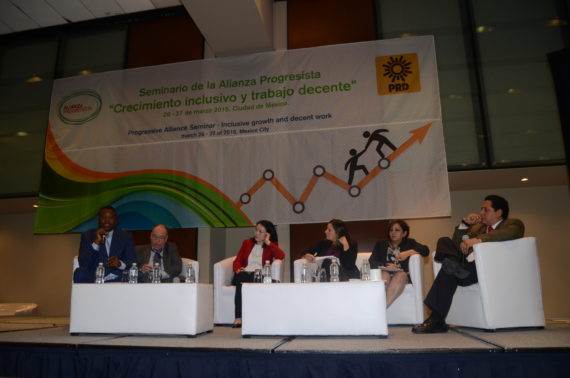 Why do we have to take action?

1. There is a close relationship between integration and exclusion in the global economy. In the recent past, social inequalities have increased between countries and regions as well as within individual societies. While the “flat world” (Thomas Friedman) now encompasses Shanghai, Johannesburg, São Paulo and Bangalore, there has also been an extension of the “planet of slums” (Mike Davis) in which entire regions and sections of society do not benefit in any way from the advances in prosperity. The global crisis has intensified these developments in the past few years. Most societies have not yet come to terms with the effects of the crisis and social tensions are worsening the world over. One of the key tasks of the future will be to develop and implement policies that are capable of reducing social inequality and the huge differences between the rich and the poor. This applies not just to income and wealth but more generally to the different dimensions of work and life.

2. There are enormous challenges to be addressed in the global working world.
Unemployment is rising around the globe with young people accounting for 40 per cent of the jobless; the labour markets suffer from permanent defects, such as the large proportion of informal workers, especially in the developing countries; the increasing level of long-term unemployment in the industrialised countries; the 400 million workers who earn so little that they still live in extreme poverty. Three-quarters of the world’s population have no social protection and there are mass violations of labour and trade union rights, including threats to and the persecution and murder of trade unionists. The growing social divide between and within societies is a breeding ground for countless conflicts. In the decades to come the question of how the global transition to sustainable economic systems can be made socially just will be crucial to success in combating climate change. Finally, how can alternative approaches be upheld and asserted in the face of the power of global corporations, competition for production sites and state repression?

3. Full employment and decent work for all are crucial to social and economic development. The creation of jobs and better working conditions makes it possible for people, and thus states and communities, to shake off the bonds of poverty and improve living conditions. Full employment and decent work are of central importance for greater social and economic sustainability in the context of a global agenda. This is, after all, a constant and recurring challenge facing all countries, irrespective of whether they are developing, threshold or industrialised countries.

4. In many countries the fight against poverty cannot be sustained without continuous growth. Yet the bare figures on growth say little about its impact. For in many countries on the planet economic growth and material prosperity bring no benefit to the vast majority of the population. In these countries jobless growth is often not the exception but the rule. High growth rates have not led to more jobs. On the contrary, they have exacerbated existing inequalities and encouraged social exclusion. Then there are are the working poor, in other words those who suffer poverty even though they have a job, who work under bad conditions and are mostly excluded from any form of social protection.

5. In most countries micro, small and medium enterprises (MSMEs) create the lion’s share of jobs. In many developing countries 90 per cent of MSMEs have less than ten employees, most of whom work under informal conditions without registration, legal recognition of workers’ rights or social protection.

6. Agriculture remains the key economic sector in many developing countries and is essential for food security. Seventy per cent of the world’s poor live in rural areas and are partly or wholly dependent on agriculture. Yet in recent decades this sector has been neglected by governments in the countries concerned as well as by donors. Growth in agriculture is twice as effective in combating poverty as growth in other sectors.

7. Paths to growth in developing, threshold and industrialised countries must be developed as follows. Growth must not be to the detriment of the climate and the environment; a consistent fight must be waged against poverty and decent jobs created so that an overall contribution can be made to social and ecological progress. The requisite structural adjustments must be made at both the national and international level.

What action can we take?

8. A decent work agenda for inclusive growth means
a) putting employment and decent work at the heart of growth and development
strategies;
b) pursuing the aim of full employment and productive jobs for all – with a special focus
on women and young people;
c) improving the environment for setting up small and medium enterprises;
d) promoting rural development;
e) concentrating on the quality of work and living conditions;
f) ensuring that decent work and inclusive growth became permanent items on the
international agenda.

9. Crises offer opportunities to adjust development paths. One-size-fits-all approaches do not work because the prerequisites and conditions vary too much from country to country. In future, qualitative growth paths must take due account of two areas: ecologically sustainable growth with a focus on low-carbon developments as well as socially sustainable growth that creates jobs.

10. Without macroeconomic policies growth cannot be optimally harnessed to fighting poverty and increasing the number of quality jobs. The aim of creating quality jobs must be more closely integrated into the strategic macroeconomic framework. This frequently also entails a shift from an austerity policy to a general strategy designed to create jobs through private and public investment.

11. In many countries production and export concentrate on primary products and especially raw materials. For example, primary products together with industrial products based on the consumption of natural resources now account for 85 per cent of the exports from Latin America to China. Apart from the poor working conditions in these sectors this economic model is also associated with conflicts over land and a creeping process of deindustrialisation, which heightens the pressure on wages and workers’ rights. Measures to ensure redistribution, the legal protection of workers, farmers and indigenous populations, a fair balance of interests and – in the medium term – the conversion to a different economic model are particularly urgent if growth is to be inclusive.

12. Political strategies must rest on robust data which supply differentiated figures on poverty, employment and inequality. The ‘data revolution’ proclaimed as part of the  Sustainable Development Goals offers a way of improving the statistical recording of business activities and labour, especially in the developing countries.

13. Inclusive growth presumes a comprehensive labour market policy ranging from the legal framework for decent work to initial and further training measures. This applies first and foremost to the area of informal work in which the vast majority of workers in developing countries are employed. The measures to be taken here include the better regulation, introduction and raising of the minimum wage, the further formalisation of jobs, improved industrial health and safety standards and the implementation of basic social protection.

14. Inclusive growth strategies must be differentiated. Groups especially affected by precarious employment, poverty and unemployment require special solutions. This applies primarily to women and young people who suffer first and longest from economic crises. National inclusive growth programmes must take account of this in their development strategies. This also includes the better participation of women and young people in policy formulation and in gender equality policies in general in all areas of society.

15. Decent work includes fair and economically appropriate wages. Industrialised countries must undertake not to engage in future in any beggar-my-neighbour policy in the form of wage dumping under the pretext of international competitiveness – this for global/overall economic reasons as well as for distribution policy reasons. Ensuring due regard for the autonomy of the two sides of industry and making use of the social dialogue between employers and employees as well as of the governmental control instruments which vary from country to country, governments should make every effort to guarantee that wage development in their countries is not to the detriment of workers.

16. The participation of trade unions and the strengthening of the social dialogue are essential if growth is to be inclusive. This can only function if workers’ representations and trade unions are strong and can work freely.