EUROPEAN DEFENCE AND PRIORITY TO PEACE: LET’S FINALLY MOVE FROM WORDS TO DEEDS! 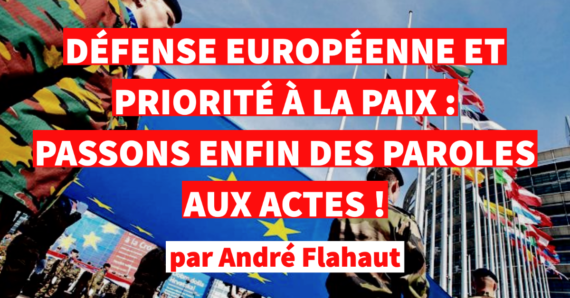 EUROPEAN DEFENCE AND PRIORITY TO PEACE:
LET’S FINALLY MOVE FROM WORDS TO DEEDS!

André Flahaut (PS Belgium)
Minister of State, Member of Parliament
Belgian Minister of Defence from 1999 to 2007
Member of the Honorary Committee of the European Society for Defence INPA (S€D)

Since the Afghan debacle and the rise of skepticism towards the American “Great Ally”, more and more voices are being raised to demand the creation of a true European defence. On the left as well as on the right, everyone is elbowing their way to the media to express their indignation at a Europe that is so little respected on the international scene and incapable of acting militarily in a coherent manner.

European logic and sirens of Atlanticism

Yet, just yesterday, how many people were concerned about it? How many were calling for it? Until now, there were only a handful of us! The British did not want it. The French were reluctant, as were the Germans, Italians, Spaniards, Poles and so on. In fact, most of our NATO allies saw no benefit in developing Europe’s strategic autonomy – not by a long shot.

For my part, as Defence Minister in the Verhofstadt governments and since then, I have always sought and encouraged European synergies to ensure better coordination of training and procurement. It is with this in mind, and despite the criticism, that we have acquired the NH90 and the A400M aircrafts.

Most of my successors at the head of the Department of Defence, lacking this European fiber, have preferred to give in to the sirens of Atlanticism. The choice of the F-35 – an extremely expensive aircraft, whose reliability is still uncertain and whose flight systems will remain in Washington’s hands alone – is the best example. Therefore, let’s not hesitate to say it: the new converts to European defence, in Belgium as elsewhere, are like the carabinieri of Offenbach… they arrive very late.

The ambivalence of the United States

That being said, it has become impossible to procrastinate any longer: we urgently need to learn the lessons of the past, to rebalance the balance of power and to bring out new modalities in the system of alliances. Syria was a failure. Iraq was a failure. Afghanistan was a failure: a military disaster, a financial drain, and a human peril.

Moreover, it must be noted that European states spend (cumulatively) a lot on their defence. But they spend badly. And, due to a lack of coordination, their military equipment is not very interoperable. Faced with this European disunity, the United States – for whom “America First” is a given – manages to impose its equipment, the interoperability of which it boasts.

For the Americans, whose commitment to our side is not without mercantile and geopolitical ulterior motives, Europe’s strategic autonomy is a serious stone in the shoe. Consequently, our “Great Ally” likes to test the solidity of the transatlantic link at regular intervals. For him, it is a good opportunity to divide and rule by pointing the finger at countries that step out of line; those that do not spend enough on NATO and refuse to submit to the 2% dogma; those that, in his eyes, show a clear lack of Transatlantic solidarity.

Let us remember Belgium’s “No” to the Iraq War and the wrath of Washington. That was in 2003. I was then Minister of Defence. Let’s also remember that our country, whatever one may say, has never been caught out during the 20 years of its presence in Afghanistan.

Building a credible and coherent Europe

All in all, the security of Europe is not the priority of the United States! But it must be ours. It is up to us, without further delay, to transform words into concrete actions and to shape, together with the states that want to commit themselves together, a Europe capable of being credible on the international political and diplomatic scene. On the one hand, this credibility implies pooling forces, equipment, and technologies. On the other hand, it implies coherence in the training and instruction of military personnel. Above all, it requires developing a certain vision of the future based on common international ambitions.

Let us understand that there can be no Diplomacy without Defence, nor Defence without Development Partnership, in Europe as anywhere else. This is the very principle of the 3D approach. Without Defence, the diplomatic tool remains incomplete and ineffective in promoting peace as much as in gaining the respect of our declared partners and friends; as Dalida sang, it is only “Words… Words…”. We see it every day.

Today, Europe is conspicuous by its absence: let us think of the African continent – with which we share a long History and a traditional axis of solidarity – and the Middle East. Where was Europe during the violent clashes in Gaza last May? Where was it during the recent earthquake in Haiti? What about its presence in the Sahel – which tomorrow could be the scene of a new debacle? Europe is, too often, missing in action…

For his part, our High Representative for Foreign Affairs and Security Policy, Josep Borrell, despite his qualities, currently has a rather limited role and room for maneuver. There is no doubt that his function and his capacity for action should be strengthened, as was the case in the time of Javier Solana, who, in ten years, from 1999 to 2009, was able to deploy some twenty security and defence operations on three continents.

More than ever, with those countries that wish to do so and through a European Defence worthy of the name, we must work, in dialogue and with respect for human beings, to build peace, prosperity and collective security. No one else will do it for us!

The invasion and military intervention of Russia in Ukraine raises the risk of a new war, including a nuclear war, in Europe. Putin stance is not only a criminal act, it is also a mistake: it is a back-clash from a common security balance based in trust building measures and international treaties, to the law of the most powerful. However, the U.S., Europe and NATO failed to involve Gorbaciov’ Russia in the building of a common security, geopolitical and economic cooperation in the post ’89. This created decline and resentment over the years, favored the surge of nationalistic and populistic stands which found in Putin a popular leader. Mitterand alerted us that “nationalism means war”. S we should have known better. In the same time, the U.S. withdrawal from Afghanistan, after 20 years of a mission that started as a counter-terrorism operation, evolved into a regime change operation and ended up as a nation-building exercise which failed and provoked intense questioning among allies. The most important message was, that the U.S. is leaving the era of trying to remake the world by force behind it. And rightly so: following the West hegemonic thinking, starting from the ’90 (the economic globalization times), to the 2001 global war on terror, most of the steps taken only provoked increased resentment and rejection worldwide. 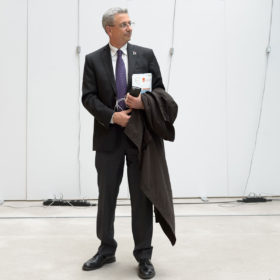