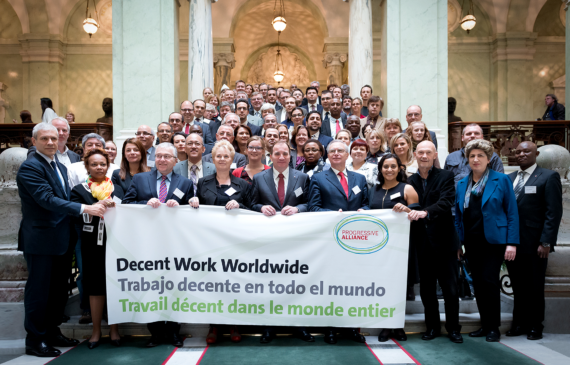 The 2008 financial crisis, and subsequent crisis and recession in the real economy directly affected many both small and large economies, and indirectly a large part of the rest of the world. The negative consequences linger and manifest itself both in economic and social consequences. The recovery in growth has been slow and even absent in some hard hit economies, and inequalities in income have increased following the fall in employment. Some policy responses have been taken aiming at increasing the stability and predictability in financial markets to avoid future destabilization caused by, relative to other areas of the economy, excessive and volatile capital amounts. Strengthening public confidence and faith in building progressive and inclusive societies requires a national and international dialogue and decisions regarding new policy approaches.
About half of the world’s working population lives in countries that do not guarantee the right to form trade unions, and collective bargaining coverage is low in many countries. In addition, the economic crisis has lead to a deterioration of social dialogue, which weakens the prospects of finding common solutions between capital and labour.
Global markets stand before tremendous challenges: weakening of social partnership, half of the world’s working population working in the informal economy, growing income inequality, rising levels of atypical work, major changes in the production chain, increasingly fragmented production scattered across the world – just to mention a few.
These are not only consequences of recent years and the financial and economic crisis, but also a consequence of increased mobility of capital. These challenges are facing labour, business, politics and the structure of entire societies. The challenges are facing both developing countries as well as industrialised countries. It also set new challenges for the long term growth development. To boost living standards and to secure corporate success, it is crucial to find consensus for in what way growth should be promoted.
With experience from the crisis and a vast period of hampered growth fresh in mind, there is a unique opportunity to learn from past mistakes, correct deficiencies in the control system and sharpen the ability to success. Now is not just an excellent time to find consensus between different interests – capital, business, social partners, civil society, and politics – but also time to realize a vision of a global and equitable economic development.

“A new global deal between capital and labour” was the topic of the Anna Lindh seminar, jointly hosted by the Swedish Social Democratic Party and the Swedish Trade union Confederation, held in Stockholm in September 2012. The discussions, which involved representatives from politics, social partners and business, pointed out a need for a new power balance between politics, labour, business and capital in order to create a sustainable development.
“What we need is to secure a basic model worldwide – a new global deal between capital and labour, putting in place a foundation for free and fair trade, shared prosperity and decent work for all. And to achieve such a deal puts new demands on both governments, on business, and on labour.”

The Swedish Social Democratic Party leader Stefan Löfven, at the Anna Lindh seminar, September 2012.
Globalisation and mobile capital flows offer indeed an opportunity for increased growth which creates capacity to increase prosperity for all. A continuing challenge ahead is however to yet improve the functioning of capital markets. Without proper regulation, and without clear political will, the result of increased trade might still be growth, however not automatically equitable distributed and not as economically effective and sustainable as possible. To put it simple, the natural driving force of private capital is profit maximization, and the driving force of labour is a decent living standard. The driving force of states should be the well-being of its citizens and economic stability. In the long run these actors are inter-dependent, as the objectives of each depend upon strong and sustainable growth.
Governments and citizens, capital and labour – all have something to potentially gain from a growing economy. Efforts leading to increased productivity, employment, research and development mean greater scope for tax revenues and welfare services, as well as increased profits and wages