Feminism Against the Right 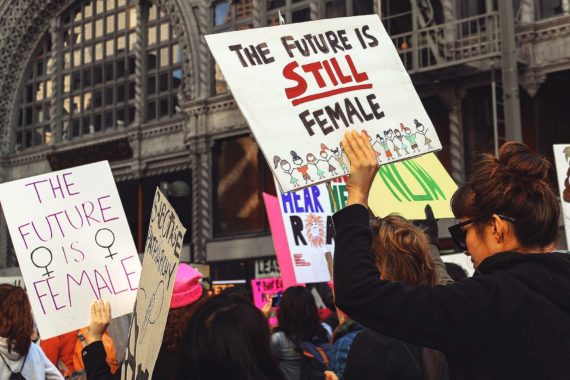 The global political and social landscape has suffered a backlash on women’s rights by becoming increasingly repressive, xenophobic, extremist and patriarchal. In the wake of economic crises, aggravating or re-emerging conflicts, unsolved social questions and environmental imbalances, right-wing nationalist and also anti-feminist movements have become stronger in many countries all over the world and authoritarian structures tend to persist or gain strength. Proponents of national and protectionist responses to social, political and ecological crises often try to legitimise their action by creating a division between them and the others, targeting migrants, asylum seekers, ethnic and religious minorities, as well as members of the opposition and women.

In this context, feminist activists are regarded as alleged risks to a stable society and are being targeted by conservative forces. Feminists fighting for equal rights, the self-determination of women and against sexism, are being attacked as individuals and their positions are called into question.

As feminist movements, activists, and feminists are under attack both verbal and physical, broad alliances in civil society and in politics are more needed than ever. An exchange of knowledge and experiences is required to raise the awareness of the structural dimension of oppression and develop a critical stance regarding internalised stereotypes. The challenge is to question traditions and identities and re-politicise societal and living conditions.

New tactics and strategies are needed, among which would be to include women in the decision-making process. Progressive parties, trade unions and other civil society movements need to establish alliances with feminist movements showing unity and legitimising feminist movements. In particular, the potential for a deeper strategic exchange between feminist movements and trade unions is hardly being used, feminists still too often have to work in silos instead of having alliances with parties, trade unions and associations in order to develop a common agenda. Such an agenda should tackle practical and strategic questions and develop interdisciplinary, intersectional and concrete approaches beyond neoliberalism in order to counteract right-wing populism. Gaining a broader democratic expertise and understanding, using trade union and party structures as well as linking social questions with gender policy issues could be strategic approaches to counter right-wing populism.

Right-wing populism is attacking the fundamental values of democracy. Social and economic justice, health care and climate change are feminist issues, and right-wing populism requires active and inclusive feminist resistance. The ability of feminist movements to form alliances with other social movements, parties and trade unions at the national, regional and global level is essential to prevent societies from drifting apart. Main challenges still need to be faced, such as the fight to eliminate violence against women, sexual and health’s rights, pensions and wages gaps between women and men, all forms of violence against women, harassment or the role of social networks in the attacks to women. As a feminist organization we believe that the fight for gender equality is a fight for human rights and democracy.