What has become crystal clear is that we already knew how aggressive Putin could be towards civil society, because he had already done so in Syria, where sarin gas had also been used by the regime, which the West did not sanction properly and which now supports Putin.

“Peace is always beautiful” are the words of Walt Whitman, who died in 1892. Then, tired of the way the world had been developing, with a history not lacking in wars, he failed to witness that 1945 was a key date on which we Europeans decided to end what we thought would be our last war at home. Peace was one of the main reasons for the start of the European integration process, along with prosperity and our own identity. It was essential that within Europe, the most sacred value that should never be violated, the value of life, should never be violated again. The other key dates were 1989, the fall of the Berlin Wall, and 1992 with the disappearance of the USSR, when many of us looked forward to a new era where there were no opposing blocs and where international law and the right of many nations to establish themselves as sovereign and independent would prevail.

Our conscience, aware that these fundamentals could not change, has suddenly encountered the grandiloquent imperial style of what might be called Vladimir Putin’s delusions of grandeur, which was already on the horizon with the constitutional change he made in 2020 to run for more presidential terms when he could only do so twice. It is still somewhat confusing to see a leader in the 21st century behaving like a Russian tsar from the days of past wars. That imaginary we have of the great colonial powers is where it belongs, or should belong, in the history books. However, I would like to recall that, although Putin has carried out this invasion unilaterally, illegitimately and illegally by invading an independent country, the 1990s left us with the bloody Balkan wars in Europe; the context, geography and conflict differ, but let us not forget that the ethnic-religious element in both scenarios is an underlying factor.

The identity element is one of the trump cards Putin has always used in Ukraine. From 2013 until now Ukraine has experienced the conflict in the Donbas as a reaction to the Euromaidan, the latter against the stance of the government, which at the time suspended the Association Agreement between Ukraine and the European Union and led to the fall of the government. In 2014, Russia annexed Crimea, and this year, since the beginning of the invasion of Ukraine, Putin recognised as independent republics the Donets and Luhansk territories in the Donbas, which had already been seized by pro-Russian separatists since 2014, and where the majority of the population speaks Russian. The Minsk agreements, whose main purpose was to end the conflict between Ukrainian and Russian-backed separatist forces in Donbas, were thus disabled.

Moving feelings is a matter of extreme irresponsibility, especially between brothers, as Hélène Carrère d’Encausse, the great French historian of Russia and the USSR, said in a recent interview: “fighting Afghans is one thing, but fighting brothers… every Russian family has a Ukrainian, every Ukrainian has a Russian in the family. The rift is aberrant for Russia. And there is a geopolitical rupture. This adventure is a total failure. It was unimaginable.

Ukraine has a percentage of ethnic Ukrainians who make up the majority of the population, although there are also significant percentages of ethnic Russians in the territory, as well as other ethnic minorities including, among many others, Crimean Tatars or Belarusians, who are numerically smaller, being a multi-ethnic territory. The most widely spoken language is Ukrainian, although there are also regions where Russian is spoken in the majority – bearing in mind that Russification played a major role. The religious factor is no less important, as the Ukrainian Orthodox Church with its patriarch has been consolidating since Ukrainian independence in 1991, separated from Eastern Orthodoxy. The Ukrainian church had been under the jurisdiction of Moscow since 1686 and achieved autocephaly in 2019 when the Patriarchate of Constantinople granted it legitimacy. Maintaining the unity of the Orthodox churches under the Moscow Patriarch is something Putin would also like to regain. As we can see, the desires of an outdated imperialism.

It is essential to understand the political, strategic, ethnic, religious and cultural situation in Ukraine and the historical influence on its territory from the Russian Empire to the USSR in order to understand the conflict from all angles, and the unshakeable yearning of a nation to be independent and whose pretensions had already been frustrated when they achieved it from 1917 to 1922.

What comes across with resounding clarity is that we already knew how aggressive Putin could be towards civil society, because he had already done so in Syria, where sarin gas had also been used by the regime, which the West did not sanction properly and which now supports Putin.

What Putin never foresaw is how much cohesion the invasion of Ukraine has brought to the EU as a whole and to the rest of Europe, as well as condemnation from the international community. We now claim strategic independence on issues such as defence, we have imposed a single system of sanctions, the implementation of a temporary reception directive for all refugees and we will do all we can to end our energy dependence on Russia; which will accelerate other projects that some, including the far right, did not support and which comes in the form of an energy transition as quickly as possible.

On 27 February Foreign Affairs published an article on The Kremlin’s Gas wars, Russia depends on European markets for more than half of its exports, while the EU sends only 5 per cent of its exports to Russia. In energy, however, it is different, as gas is a major economic lever for Russia in Europe. As the report notes: Belgium, France and the Netherlands import less than ten per cent of their natural gas from Russia, Spain and Portugal none. Germany relies for almost half of its natural gas imports and Italy around 40 per cent. Austria, Hungary, Slovenia and Slovakia about 60%. For Poland about 80%, and Bulgaria depends for all its natural gas on Russia. Now, after the invasion, gas prices have skyrocketed.

This can change if we can reverse energy dependence on Russia. On trade we have seen precedents in the case of Ukraine. Thus, a Bruegel.org article from 2020 already commented that while in 2012 Russia was the destination of 25.7 per cent of Ukrainian exports, compared to the EU’s 24.9 per cent, six years later Russia’s share of Ukrainian exports had fallen to 7.7 per cent while the EU’s share soared to 42.6 per cent. It follows that the EU is Ukraine’s largest trading partner.

If this conflict has shown anything, it is that we are all vulnerable to the warlike excesses of anyone who believes they can assert themselves through armies and territory. We are not in centuries past. We cannot assume that peace will reign because we believe in it, but we have to fight to keep it. This war is a frontal attack on European values and principles; that is why we must stand unwaveringly on the side of the victims; help them according to our means.

We cannot forget history and the pain of others, more than two million refugees and as many internally displaced persons. This time Europe must rise to the occasion. Today, there are mothers who are heads of Ukrainian families who do not know if they will ever see their fathers, brothers or husbands again. What is one of the worst things that can happen to a human being? Uncertainty, that perpetual agony that does not allow us to know what might happen to us, and which means that Ukrainians do not know what will become of their country and their families.

The Spanish government is here and will be here, helping the Ukrainian people. Three large centres for the reception of refugees from Ukraine have already been set up as a matter of urgency, and their documentation is being processed quickly so that they can live and work in Spain, thanks to the rapid transposition of the 2001 European directive. With a very supportive Spanish society, from our population to institutions, entities, foundations, autonomous communities and town councils. It is important to insist on the need for coordination in everything related to humanitarian aid, reception and donations with the Spanish government and the ministries involved. Any unorganised aid is not effective, and the priority now is to organise arrivals and document the refugees who are arriving. 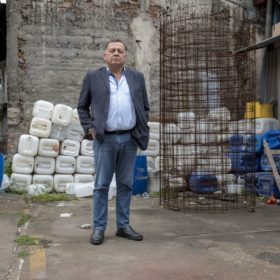