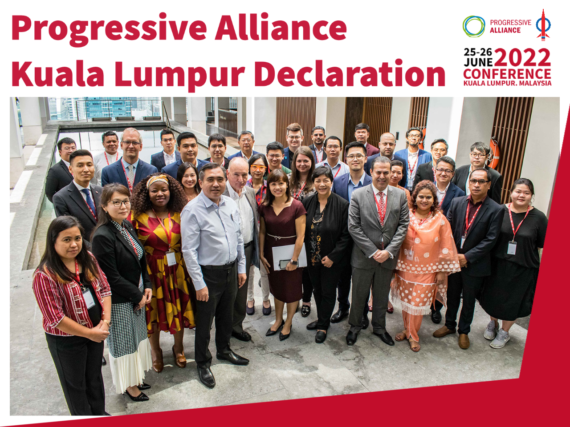 This Progressive Alliance Conference Kuala Lumpur 2022 is the first physical conference since the global lockdown due to the Covid-19 pandemic. In co-operation with DAP Malaysia for this conference, we are embarking on the first of a global series of regional conferences focused on the central pillars of Peace and Security, with emphasis in 4 key thematic areas that must be empowered and achieved to and realise Democracy, through:

This push is necessitated by the Russian war on Ukraine, and the issue of peace and security is more than the absence of war. As Progressives, we urgently need a global inclusive approach centred around the 4 ‘D’s in order to defend and promote democracy.

In line with this, we need to build new forms of global alliances between Progressives in all continents, as well as promote the issue of security not just in terms of an absence of war, but also in the areas of food, sustainable development, poverty reduction and social exclusion.

We need to do all we can to provide a good future for future generations, in particular the young people so that they have confidence in democracy as the best way forward, that it is the best system to develop solutions, and drive social investments for the public and common good.

We have seen a rise in war situations not only in Europe but also elsewhere in the world, for example, a return of military coups in Africa as well as ongoing conflicts in Latin America.

From our viewpoint, it is inevitable that we rehabilitate the necessity of diplomatic approaches and solutions even in war time, because sometimes the answer to war needs to be war, in the case of self-defence. That said, long-term solutions should and must be negotiated through diplomacy.

We recognise the right of defense, as unfortunately in the case of some countries, it would be necessary to invest in defence, but at the same time, we need to fight against the proliferation of nuclear arms and the new race for armament.

As Progressives fighting for a new, just, global order and resilient democracies, especially against the backdrop of the rise of military dictatorships like in several countries in Southeast Asia that has been undermining democracy building for years; the onus is on us to counter the cycle of militarization by focusing on common security, bound by a focused commitment to joint survival rather than a threat of mutual destruction.

The Asia Pacific members of the Progressive Alliance hereby resolves that a critical mass of regional progressive forces – whether political parties, think tanks, civil society non-governmental organisations – must band together with at least two other regions to take positions and actions in furthering the progressive democratic agenda of the 4DS.

This falls under the theme of sustainable development agenda because in the end, peace and security is our objective under the Sustainable Development Goals (SDGs).

Progressive Alliance appreciates the efforts of the PUK in protecting peace and security in Iraq, and in Kurdistan Region; and is an effective political party in countering terrorism and eradicating ISIS.

PUK has a great role in forming the new government and in approaching all the different sides.

The Progressive Alliance is deeply concerned by the shrinking democratic space in Zimbabwe ahead of the 2023 elections. In particular, the targeting of opposition leaders and members, weaponization of the law against government critics and Human Rights Defenders, introduction of undemocratic legislations and the lack of electoral reforms.

Given the centrality of disputed elections to Zimbabwe’s governance crisis, we urge the Southern African Development Community (SADC) to facilitate national dialogue among Zimbabwe’s Stakeholders to ensure that the 2023 elections are free and fair.

DAPSY Statement during and acknowledged

The COVID-19 pandemic has exposed flaws in the system: inequality, lack of social protections for the poor, and government inefficiencies in tackling the pandemic. Now even as we move into the endemic phase, we must not forget the need to address these gaps to ensure sustainable development and future-proof our nation for future challenges.

In the wider Asian context, we see the return of right-wing conservatism, authoritarianism, and the whitewashing of grand corruption and abuse of power that was aided heavily by sophisticated agents of misinformation and disinformation who exploited racial, religious, or social divisions to distract us from fundamental issues faced by people.

In the light of this: