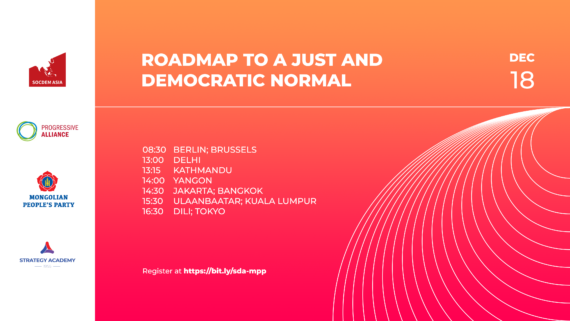 Watch the video of the conference: https://youtu.be/5SqmL-Kj0pU

Abstract:
The conference brings together progressives and social democrats from across the globe to discuss how to consolidate a progressive response to the rising tide of authoritarianism and populism on one hand and the threat of the global pandemic. This conference aims to consolidate progressive global responses and strategies: How do we solidify alternatives to the crisis as a political community? What are key battles we need to win to deter attempts to return to the status quo? It will highlight experiences and policies that shape impactful response that not only provide immediate solutions but strategic pathways with which we will build a better future and new normal than before the crisis.

The world now faces a global pandemic that whose scale is unseen since the 1918 Influenza Pandemic. Current data from the John Hopkins University Center for Systems Science and Engineering show mor than 54 Million total infections with 1.3 Million deaths as of the middle of November. Hardest hit is the United States with 11 Million infections and 246,000 Deaths. The economic projections for the effect of the pandemic are equally gloomy. Data from the United Nations Development Program’s (UNDP) Putting the UN Framework for Socio-Economic Response to COVID-19 into Action: Insights projects that 40-60 Million people will be pushed into extreme poverty and 265 Million people at risk of acute food insecurity, this is on top of the existing 55% of the world’s population (4 Billion) who are not covered by social insurance or social assistance. Due to the shocks caused by the pandemic, 1.6 Billion informal workers lost 60% of their income, remittances falling by 20%, and global trade overall falling by 3% in the first quarter with a quarter-on-quarter decline of 27% in the second quarter. These figures show an unprecedented level of poverty and hunger that endangers millions of people and has slowed the world economy.

But even before the pandemic, the inherent flaws in the world’s political, social and economic systems were already present and resulted in the most adverse effects of the pandemic disproportionately affecting the poorest, most marginalized, and the powerless. Clearly, a return to normal may mean the end of the spread of the virus but it will not address the fundamental issues that have resulted in this health and economic crises. Without a massive reorientation and reform of the social, economic, and political system a return to normal will only mean a return to unregulated markets, continued commodification of health services and social insurance, massive insecurity, uncertainty, and poverty.

Alongside this health and economic crises has been a political crisis that has hit at the heart of democracy of many countries. This crisis is the crisis of rising authoritarianism and populism and the attendant human rights violations perpetrated by these regimes. It is not surprising that even this pandemic has been cynically used to stifle dissent, tighten their grip on power and erode democratic institutions. However, the responses to the pandemic from the authoritarian and populist regimes leaves much to be desired and we can see a clear contrast between them and the performance of democratic governments. Populist strongmen and their governments have made largely inadequate and ineffectual responses by either not listening to expert advice, curtailing and containing information, or even outright science denialism. This is in sharp contrast to the science-oriented, community-driven and empathetic leadership of democratic governments.

The coming year will be a critical year for reckoning of how we want to shape the new normal: a battle on the vaccine, recovery from the recession, the changing nature of work, and multilateral frameworks are at stake. A progressive and democratic new normal must be pushed to ensure that the world does not fall into worse crises and prevent a slide into authoritarianism and populist rule. This conference aims to consolidate progressive global responses and strategies: How do we solidify alternatives to the crisis as a political community? What are key battles we need to win to deter attempts to return to the status quo? It will highlight experiences and policies that shape impactful response that not only provide immediate solutions but strategic pathways with which we will build a better world than before the crisis.