A wise person once said: “For us democracy is a matter of human dignity. And human dignity, that includes liberties as freedom of expression, the right to criticise and freedom of creating public opinion. Human dignity is the right to good health, labour, education and social security. Human dignity is the right and the realistic possibility to together with others create your own future. These rights, democratic rights, human rights, cannot be reserved to a certain class or groups in the society. These rights have to be the property of the people.

The quote is from the former PM in Sweden, Olof Palme and it feels good to start with one of his quotes, since Etta Rosales was nominated to the Progressive Alliance Award for special political courage by both SAP, the Swedish Trade Unions and the Olof Palme International Center. When thinking of these words about human dignity it is important to remember that they are not just words but they do actually mean something. And one person, who has shown dedication, devotion and determination, in both word and in action is our Comrade Etta Rosales. It is of course an honour for me to be the laudatory speaker to her glory.

How many of you remember what you did the 21 of September, 1972? Some of you were at work, some at home, maybe one or two in their local or national parliament. And some of us were actually not born. This is an important date, because at this time the Philippine President Marcos introduced martial law, which was his way to dictatorship in the country.

Etta Rosales’s fight for human rights and democracy had started already before. Because before the martial law numerous people were protesting. After martial law demonstrating became much more dangerous, with military shooting and arresting the few who dared to demonstrate and Etta Rosales was one of those demonstrating, being one of the organisers. Later the same year she was arrested the first time and after getting out of prison, she was forced to go underground. Then a few years later Etta Rosales was imprisoned again. This time she was incarcerated for over a month and became a victim of severe torture.

For those of you who are not familiar with the Philippine history, I will try to fill some gaps. Ferdinand Marcos was elected president of the Philippines in 1965. In 1972, as I said, he declared martial law which was in use until 1981, and Marcos ruled as a dictator until 1986. During the dictatorship of Marcos the Philippines was considered one of the ten countries violating human rights the most in the world. Amnesty International pointed out in a report from 1976, and now I am quoting “The conclusion is unavoidable that torture of prisoners (is) part of a general approach of the treatment of suspects.” The report moreover talks about electrical shocks, forced Russian roulette and sexual assault.

In 1983 an opposition leader Aquino was assassinated at Manilla airport when arriving back to the Philippines from exile. This seems to be the first step towards the fall of Marcos. Public protests and public information about misuse of public funds caused the US president to distance himself from Marcos the following year. In 1985 assemblypersons were calling for impeachment and at this time Marcos’s kidney disease was deteriorating. In 1986 snap-elections were held, officially won by Marcos. At that time enough was enough and activists were demonstrating all over the Philippines. Following pro-democracy protest, Marcos had to flee to Hawaii, leaving a tally of thousands and thousands imprisoned, tortured and killed during the Marcos regime.

When talking about activism during the dictatorship of Marcos it is impossible not to mention Etta Rosales, one of the leading activists in the struggle for democracy and respect of human rights. Organising protests, democracy gatherings and other resistance activities during these decades of dictatorship, exposing herself to great danger.

Etta Rosales will not only be remembered for her struggle for human rights, her struggle against Marcos, but she will also be remembered as the founder of the Alliance of Concerned teachers and as a politician and co-founder of Akbayan, The Citizens Action Party. During three terms she served as a congress person between 1998 and 2007. Moreover, Etta Rosales has been the chairperson of the Philippine human rights committee between 2010 and 2015. Furthermore, Rosales served as the Philippine representative to the ASEAN Human Rights Institutions forum.

As a well-known defender of human rights, Etta Rosales was imperative in a class action law-suit in the Hawaii District Court which resulted in the only judgment holding the former dictator Marcos liable for human rights violations committed during his time in power. Moreover, this law-suit forced Switzerland to release around 500 M USD, of funds which Marcos robbed of the Philippine people. A big part of this money was directed to Human Rights victims. In this process Etta Rosales, with courage and resolution, played a major role giving human rights victims rehabilitation in the Philippines.

One might think that after these years of dictatorship the Philippines were immune against fascism. Unfortunately, the struggle for democracy and justice continues!

Today’s situation in the Philippines is unbearable. When you look at it from the outside, it is like a bad movie and it is hard to understand that this is the reality in a country that had so much to hope for just a few years ago.

This rapid change started last year, when Rodrigo Duterte was elected president. The Philippines has seen an unprecedented level of killing by law enforcement since he took office. It is well over 10 000, maybe as many as 13 000 people, who were killed in the streets.

Again Etta Rosales, as brave as ever, is one of the most outspoken critics of human rights violations and organizing resistance.

We hear stories that Duterte encouraged police operations and recommended a quota of 32 kills per day as a solution to the drug problem.

It is hard to understand that these men, under the name of an anti-drug campaign, don’t care for human lives or human rights. Persons are accused without neither evidence nor trial. These extrajudicial killings are of course unacceptable and as always it is the poor people, the working class, that suffer the most.

Now Duterte has also threatened human rights groups that he soon will order police to shoot them for criticizing his programs. Equally alarming is the administration’s support to reinstate the death penalty and decrease the age of criminal liability to nine years old. And last but not least, there is constant threat of introducing martial law.

The Philippine government simply continues to deny its actions to the world and unfortunately there is a lack of strong and outraged voices among the international community.

But there is hope. In the face of these grave threats to democracy, progressive forces have started various movements to protect human dignity and democratic rights of the Philippine people. Gatherings for civil liberties have been initiated nationwide to serve as safe spaces and provide opportunities to consolidate pro-democracy forces.

Once more Etta Rosales has shown that she first and foremost is a human rights activist, when organizing opposition and criticizing Duterte putting herself at risk for the common good.

There is no person as suitable for this prize as Etta Rosales. Tonight, fellow progressives, we celebrate with her and tomorrow we continue fighting for social security, human dignity and democracy, here in Central America, in the rest of the world and of course now more than ever, also in the Philippines. 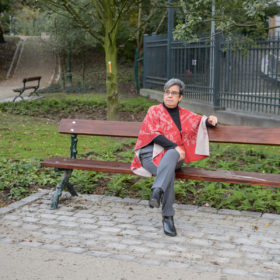