Gabriel Boric, new President of the Republic of Chile 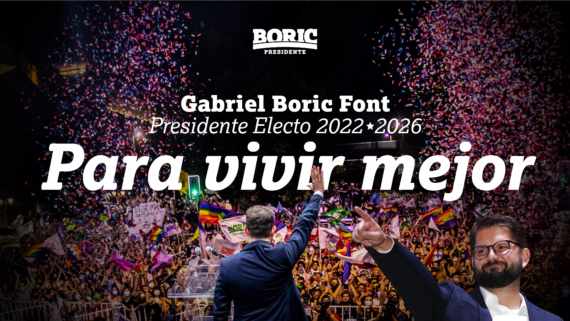 For the past 50 years, Chile has experienced a neoliberal dictatorship and a democracy dominated by neoliberalism. In October 2019, Chile woke up and stood up to say basta! Since then, its progressive forces have united in the project to work “until dignity becomes a habit”.

They first won the right to write a new constitution in a way that is unique in the world: citizen-based, parity-based and including its indigenous peoples.

Chile has now elected the one who will lead the reforms it needs, Gabriel Boric, its new President of the Republic. He is 35 years old, comes from the Strait of Magellan, in the far south of the world, and launched this movement of hope 10 years ago with his fellow student leaders.

The elections in Chile are a lesson for people who aspire to live in democracy with dignity. They are a lesson of unity for the left and progressive forces. The Progressive Alliance has been supporting these processes from the beginning and is present today in Chile to continue learning and supporting this new path of hope opened by a new generation. Hope and dignity are what the world needs, now more than ever. Long live Chile!

Statement by the mother of Ana Margarita Vijil, political prisoner, former president of the Unamos party
...
Chile
The Progressive Alliance is in Chile to support Gabriel Boric in the presidential elections
We stand with the Chilean people and Gabriel Boric! The Progressive Alliance is present in Chile to ...
#HumanRightsDay
Human Rights Day
Our global network fights for human rights every day. Today we stand with our members who are persec ...
Protected: Proposal for thematic pillar: Peace & Security. Steering Committee Meeting. 13 December 2021
There is no excerpt because this is a protected post. ...