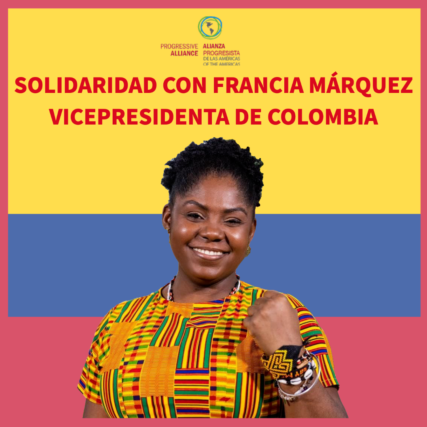 From the political parties, foundations and progressive organizations that make up the Progressive Alliance of the Americas, we express our solidarity with the Vice President of Colombia Francia Márquez, in the face of the attempt she suffered against her life.

In the last hours an event of enormous institutional gravity was known that sought to end the life of the referent of the Historical Pact for Colombia who is also a social leader, environmental activist, human rights defender, womanand lawyer. The attack consisted of placing an explosive charge of more than 7 kilos on the route he usually travels to access his residence.

Everything takes place within the framework of the first leftist government in the history of Colombia and in the middle of theprocess carried out by President Gustavo Petro to achieve disarmament and end of the armed conflict that the country has gone through for more than 6 decades.

From the Progressive Alliance of the Americas we want to express our solidarity with Vice President Francia Márquez, with President Petro, with the Colombian government and people and our full support for the Total Peace process promoted by the progressive government of the country.