The Government and WHO remain at a standstill with regard to figures on the reality of the coronavirus in Equatorial Guinea. In this regard, the Deputy Minister of Health, Damaso Mitoha Ondo, justified the Government’s concealment of data on 27 July from the media because “certain circles motivated by other ambitions were trying to manipulate or influence public opinion by taking advantage of the good intentions of the Government and the Technical Committee”. Meanwhile, the World Health Organization (WHO) mission to Equatorial Guinea continued to publish the data after the Government decided to stop publishing it regularly, but the WHO also stopped updating it on 24 May and expelled its Resident Representative, Dr. M. M. M., from the country. But the WHO also stopped updating them on 24 May and expelled its Resident Representative, Dr. Triphonie Nkurunziza, from the country at the government’s request on 26 May, leaving the population in total ignorance of the reality of contagion in the country until 15 July, when, in a joint report entitled SITREP No. 30, the Ministry of Health of Equatorial Guinea and the WHO apparently decided to resume publication of the COVID-19 figures in our country, reporting that the total number of confirmed cases was then 2. These figures were lower than those that the government itself had been declaring intermittently as real, and the most surprising thing about this presentation is that the WHO accepted them this time as credible (https://covid19.who.int/region/afro/country/gq )
, a fact that CPDS criticized in a statement issued on July 19.

Since then, the publication of data has not continued, in fact, on the same date, the website Worldometers, which contains the official figures of the Government of Equatorial Guinea (https://www.worldometers.info/coronavirus/country/equatorial-guinea/
) attributed to the country 3,071 confirmed cases and 51 deaths. This is a difference of 721 cases in relation to the WHO.

The tables in the original show the discrepancies between the data handled by the WHO (last updates: 24/05 and 17/07) and those shown on the Worldometers page (last update on 03/07). 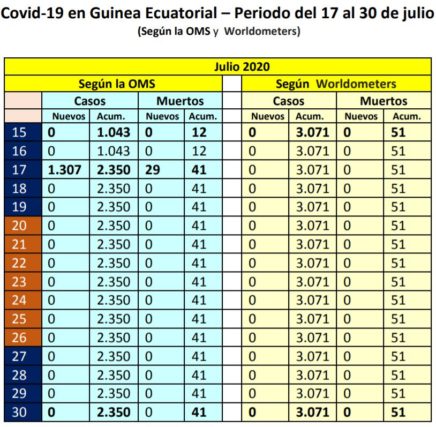 Within this formidable mess, and while Mrs Mary Stephens, an expert from the WHO regional office in Africa, warns that the peak of the pandemic is yet to come in Africa, our deputy health minister, Damaso Mitoha Ondo, states that the contagion curve in Equatorial Guinea reached its peak on June 5th and began to fall on the 15th of the same month.

From all evidence, it is difficult to arrive at an epidemiologically valid and illustrative curve of reality with the disparate figures provided by the available data sources. Under these circumstances, what curve is the Guinean government member talking about? What data was used to construct the curve? Can a curve be constructed with such a wealth of data? Can such a curve be made public so that everyone can see it, and can the Guinean government epidemiologists explain how they constructed their curve?

Convergence for Social Democracy is following with great attention and concern the Government’s statements on the evolution of the situation of infections and deaths from the new coronavirus in Equatorial Guinea and trusts that the Government will agree with the WHO on the reality of the pandemic in order to provide reliable and credible information to the population of Equatorial Guinea and the international world, because the seriousness and credibility of both are in question.

SocDemAsia
NETWORK FOR SOCIAL DEMOCRACY IN ASIA (SOCDEM ASIA): STATEMENT ON THE ARREST OF MALAYSIA DEMOCRATIC ACTION PARTY LEADER LIM GUAN ENG
The Network for Social Democracy in Asia (SocDem Asia), a regional network of social democratic and ...
Impact of COVID-19 on Global Youth
In the discussion organized on the 22nd of July 2020, by IUSY, YES and Progressive Alliance, we expl ...
Palestine Statement
Statement of PROGRESSIVE ALLIANCE: STOP ANY PLAN OF ANNEXATION OF PALESTINIAN TERRITORIES
The newly composed Israeli government has foreseen in its coalition agreement the annexation of Pale ...
Coronavirus
Walls and weapons can’t stop a virus: priorities must change!
By President of Palestinian National Initiative and board member of Progressive Alliance, Mustafa Ba ... 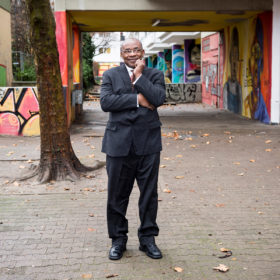